Microblading is a beautiful technique of eyebrow shaping, defining and thickening that is similar to tattooing, but yet has many differences. In this blog, I want to educate readers on 4 main differences between microblading VS eyebrow tattooing.

For our first microblading VS eyebrow tattooing subject, let’s talk about the difference between pigment and ink. Tattoo artists use ink when they perform their procedures. With microblading, instead of using ink, we use pigment. Pigment fades to a lighter version of whichever color is used instead of fading to a blueish-green, like tattoo ink tends to do. Have you ever seen someone with blocky brows that have a strange blueish green tint to them? Most likely that someone was an aunt or grandma or somebody born in the era where brow tattooing was extremely popular. Having eyebrows that looked like they were sharpied on was actually the trend.

Unfortunately, after years of enjoying their sharpie brows, they eventually faded and now have interesting color hues that they did not sign up for. I don’t know about you, but I would rather have something semi-permanent that retains a natural color than have something “permanent” that eventually fades to blues and greens. This brings me to my next comparison…

Eyebrow tattooing is a permanent procedure and as described in the previous paragraph, it does fade slightly and change colors a bit. Microblading is a semi-permanent procedure that lasts from 1-3 years and eventually just fades to a lighter brown or black (not blue or green). Sure, microbladed customers will have to get them touched up every year or so to retain the darker color, but in my opinion, it’s better to have to touch them up occasionally than end up with strangely colored brows that look unnatural. With microblading, you are able to stay current with brow trends. You have the ability to make changes to the shape as desired each year or so. Never heard of eyebrow trends? Just take a look at the past 20 years and how brows have gone from the popular thin and dark to thick and natural.

If a person’s eyebrows are tattooed on, that permanent ink is there for life. If the trend ever goes thin and dark again, but your eyebrows are tattooed thick, you’ll be stuck in the past as everyone else moves forward. Ok, that was a bit grim. It’s not life or death, but anything permanently done to your body should be well thought out. So far, what’s your take on microblading VS eyebrow tattooing? I’m sure this knowledge has opened your mind quite a bit! Let’s continue…

The technique in microblading is very different than that of eyebrow tattooing. Instead of having one thick and dark brow created by tattooing, microblading uses a technique of individual hair-like strokes that look almost identical to your natural brow hair. The technician will study the pattern of your brow hair growth. Then, they will follow that pattern as they create new lines. These lines will fill in the areas that your brows are patchy or do not grow hair at all. The end result is thicker, fuller brows that look almost completely natural. You’d have to look real hard to notice that it’s not.

The trend of today, and one that is truly timeless, is that of effortless beauty. You want to look like you just wake up and naturally look gorgeous. That’s the goal, right? It is the main reason why services like eyelash extensions and permanent makeup have become so popular. Women (and some men) want to be able to look and feel beautiful, with or without makeup on. They desire the appearance of natural beauty, even if it’s achieved unnaturally. When you think of microblading VS eyebrow tattooing as it comes to more natural looking, I think we all know the winner.

This is one area that microblading vs eyebrow tattooing have many things in common. Both will take up to 4 weeks (sometimes 6) to fully heal. They will require a post-procedure touch up once the brows are healed to fill in the areas that the pigment or ink didn’t take as well as other areas. They will also both have redness and possible swelling directly after the procedure that can last up to two days. What are some differences? With ink, if there were any mistakes or lines that were created that were undesirable, it is very difficult to fix it. Because microblading uses PIGMENT; if there were any strokes out of whack that you wanted to get rid of, it is possible. First off, the pigment will fade about 40% before your touch up. When it fades, those unruly strokes will almost disappear.

When your microblading specialist goes back in to touch up your brows, he/she simply has to avoid going over the strokes that you did not want to keep. By darkening the rest of your brows, it will diminish the mistakes and eventually, they will fade completely. As a side note, I might add that it is very unlikely that you will have lines out of whack. But atleast you know that if your specialist messes up, there is a way to fix it. DFW Microblading has a special secret sauce to your brows healing faster and retaining more pigment. We use a product called Strato-cell. Strato-Cell creates a thin, skin-like barrier that helps with pain, swelling, healing, and pigment retention. With strato-cell, your brows will heal in half the time. Customers will be able to purchase this product soon on our website!

I hope this blog has been informational and helped you further decide on whether you should get your brows tattooed or microbladed. Although it’s an expense that some don’t want to make, I can say from experience that not having to draw my brows on everyday has made this procedure the best money spent! I’m saving tons of time in my morning routine. 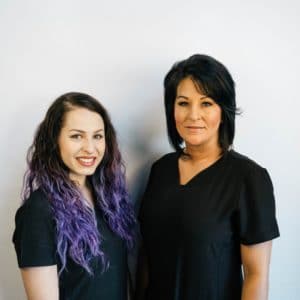